Ruby was a small 4.5 Asian elephant who was known for her paintings. Her owners would see her doodling with her trunk in the dirt and eventually decided to give her some paint and a canvas. She went up from there. She eventually died in 1998 burthing her 320-pound calf. Her calf had died in the womb causing her to have a massive infection. She was then euthanized to save her from pain.

Batyr was known as the "speaking elephant" because he was able to replicate human noises. He spent his whole life in a zoo in Kazakhstan and never met another elephant. He started talking around 8 years old. He woyuld ask attendants for water and would praise himself. He would say Batyr, water, good, bad, fool, yes and give. He would imitate dog barks and human whistles. He would make the noises by pushing his trunk into his mouth and manipulating his jaw and tounge. He eventually died in 1993 at the age of 23. 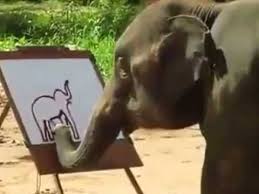